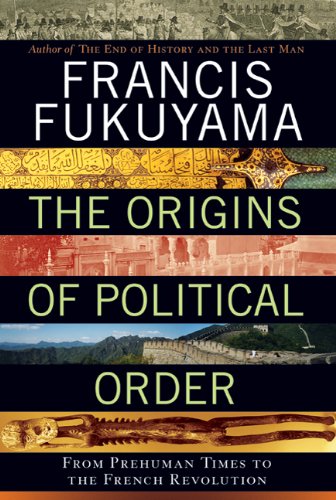 Nations are not trapped by their pasts, but events that happened hundreds or even thousands of years ago continue to exert huge influence on present-day politics. If we are to understand the politics that we now take for granted, we need to understand its origins. Francis Fukuyama examines the paths that different societies have taken to reach their current forms of political order. This book starts with the very beginning of mankind and comes right up to the eve of the French and American revolutions, spanning such diverse disciplines as economics, anthropology and geography. The Origins of Political Order is a magisterial study on the emergence of mankind as a political animal, by one of the most eminent political thinkers writing today.

Virtually all human societies were once organized tribally, yet over time most developed new political institutions which included a central state that could keep the peace and uniform laws that applied to all citizens. Some went on to create governments that were accountable to their citizens. We take these institutions for granted, but they are absent or are unable to perform in many of today’s developing countries — with often disastrous consequences for the rest of the world.

In The Origins of Political Order, Francis Fukuyama, author of the bestselling The End of History and the Last Man, provides a sweeping account of how today’s basic political institutions developed. The first of a major two-volume work begins with politics among our primate ancestors and follows the story through the emergence of tribal societies, the growth of the first modern state in China, the beginning of the rule of law in India and the Middle East, and the development of political accountability in Europe up until the eve of the French Revolution.

Drawing on a vast body of knowledge — history, evolutionary biology, archaeology and economics — Fukuyama has produced a brilliant provocative work that offers fresh insights on the origins of democratic societies and raises essential questions about the nature of politics.