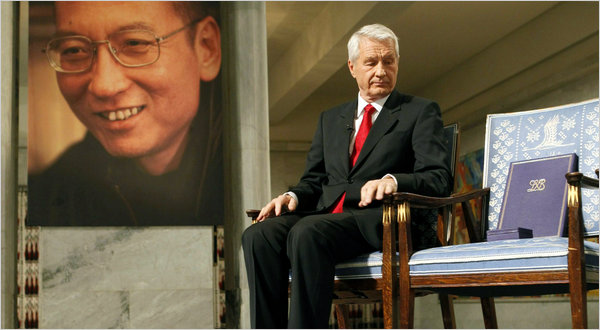 Two (so far) most recommended comments:

China does need democracy, but we absolutely do not need the Western one. In your democracy, what’s most important to win an election are money, a glib tongue and an extremely brazen face. Ordinary people have no choice but to pick a less rotten apple among rotten apples. Before election you can get everything promised by the candidate, after it nothing will be realized. With 1.3-billion population and 56 ethnic minorities, a Western democracy will definitely threaten the unity of our country. China is more like European Union and many provinces of which have tens of millions of population. What’s more, the majority of Han people can easily eclipse other minorities’ voice, such as five-million Tibetans and nine-million Uighurs. Under the so-called democracy, the rights of the minorities will be deadly compromised and social conflicts can be completely aroused. Furthermore, most of the Chinese people lack the knowledge of basic principles of democracy. They know nothing about forgiveness and pardon. The notion “I disapprove of what you say, but I will defend to the death your right to say it” is almost unknown to 99 percent of the population. If they disapprove of what you say, they will try to silence you completely. This is not the fault of our government. Sadly, this is the prevalence in China. Those who oppose you are to be eliminated. That’s the main difference between the Western world and China. I think we Chinese need a revolution of thought which should aim at the deep-rooted conservative thoughts of the masses. Only a democracy won’t solve the problems of China and can hold up our development, even arouses social unrest, which, at last, will only greatly damages the welfare of the people. Something deeper than political system should be thought. Liu Xiaobo is a little naive and shallow and his ideas almost don’t suit the actual conditions of China. Though I don’t agree with all what he said, I still respect him for his brave advocacy of human rights and the freedom of speech which are essential to a more democratic society. That’s what China needs.

I always admire Liu Xiaobo as an individual and also share many of his views for more freedom and democratic reform in China.Personally I am totally against jailing mr. Liu for his views and political activities. I was also a student participant in 1989 demonstration, and participated in many liberal forums in Beijing in 1986-89. However I strongly believe that China, as well as all all developing countries, should put its priority on economic development first while introducing political reform and democracy in steps corresponding to the country’s economic development, institutional reform and level of education.

However I strongly disagree with the Noble peace award to Mr. Liu Xiaobo, instead a freedom and democracy award is far more appropriate. He has done nothing as a peace promoter and similar rationales can be applied equally against last year award to President Obama who has been directing the US army in wars in many countries and in military exercises around the world showing US hegemonic power and military might, opposite to a peace award. It is not surprising that many people around the world now perceive the Noble Peace Prize more a political tool to promote Western political views and system in the name of universal suffering, as opposed to its real name for peace and reconciliation between people of different background, culture, countries and races, and co-operation between nations.

It is very important for restore the Noble Peace Prize to its original intention as a recognition for those who foster peace as well opposing wars and conflicts, rather than a stealthily transformed prize for democracy and human rights. These three goals are all important, but different in nature, and definitely not substitute for one another particularly in poor developing countries. As a matter of fact, many major wars, military adventures and colonisation were initiated by countries with democratic systems such as Nazi Germany, Japan, and Imperial UK, and were often started by democratically elected leaders such as Lyndon Johnson’s Vietnam war. In addition, a non-democratic country can be a country of peace if the country has no involvement in wars or conflicts abroad and no systemic repression at home. In many cases, imposing democratic systems in a poor countries without the proper institution reforms and economic development preceding it often resulted in rising tensions, conflicts and misery for its people. Arguing human rights is the same as peace is ignoring human long history, and the cultural and development divide/gap between the rich and industralised West (less than 700 million people) and the rest of the world (almost 6,000 millions). Therefore democracy and human rights are worthy goals, but are not the same as peace. As common sense say, “related but not one, not the same”

My suggestion is for Noble Peace Prize to be renamed Noble Human Rights and Advocacy for Democracy Prize, and separately have UN (the United Nations) to establish a universally agreed and neutrally assessed UN Peace Prize