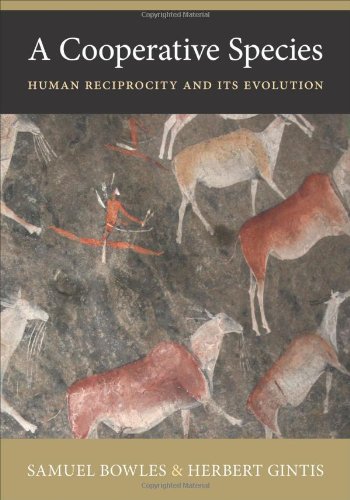 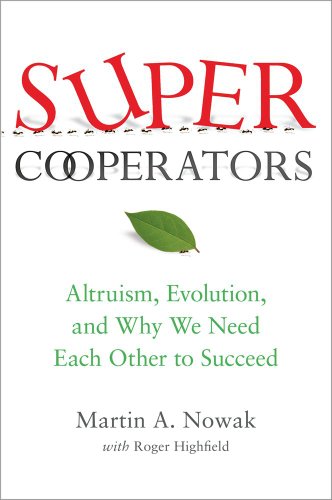 EVOLUTION IS OFTEN PRESENTED AS A STRICTLY COMPETITIVE ENDEAVOR. This point of view has had serious implications for the way we see the mechanics of both science and culture. But scientists have long wondered how societies could have evolved without some measure of cooperation. And if there was cooperation involved, how could it have arisen from nature “red in tooth and claw”?

Martin Nowak, one of the world’s experts on evolution and game theory, working here with bestselling science writer Roger Highfield, turns an important aspect of evolutionary theory on its head to explain why cooperation, not competition, has always been the key to the evolution of complexity. He offers a new explanation for the origin of life and a new theory for the origins of language, biology’s second greatest information revolution after the emergence of genes. SuperCooperators also brings to light his game-changing work on disease. Cancer is fundamentally a failure of the body’s cells to cooperate, Nowak has discovered, but organs are cleverly designed to foster cooperation, and he explains how this new understanding can be used in novel cancer treatments.

Nowak and Highfield examine the phenomena of reciprocity, reputation, and reward, explaining how selfless behavior arises naturally from competition; how forgiveness, generosity, and kindness have a mathematical rationale; how companies can be better designed to promote cooperation; and how there is remarkable overlap between the recipe for cooperation that arises from quantitative analysis and the codes of conduct seen in major religions, such as the Golden Rule.

In his first book written for a wide audience, this hugely influential scientist explains his cutting-edge research into the mysteries of cooperation, from the rise of multicellular life to Good Samaritans. With wit and clarity, Nowak and Highfield make the case that cooperation, not competition, is the defining human trait. SuperCooperators will expand our understanding of evolution and provoke debate for years to come.

Law is a specific form of social regulation distinct from religion, ethics, and even politics, and endowed with a strong and autonomous rationality. Its invention, a crucial aspect of Western history, took place in ancient Rome. Aldo Schiavone, a world-renowned classicist, reconstructs this development with clear-eyed passion, following its course over the centuries, setting out from the earliest origins and moving up to the threshold of Late Antiquity.

The invention of Western law occurred against the backdrop of the Roman Empire’s gradual consolidation—an age of unprecedented accumulation of power which transformed an archaic predisposition to ritual into an unrivaled technology for the control of human dealings. Schiavone offers us a closely reasoned interpretative essay that returns us to the primal origins of Western legal machinery and the discourse that was constructed around it—formalism, the pretense of neutrality, the relationship with political power. This is a landmark work of scholarship whose influence will be felt by classicists, historians, and legal scholars for decades.

Aldo Schiavone is Professor of Roman Law and Director of the Istituto Italiano di Scienze Umane.

Religion in Human Evolution is a work of extraordinary ambition—a wide-ranging, nuanced probing of our biological past to discover the kinds of lives that human beings have most often imagined were worth living. It offers what is frequently seen as a forbidden theory of the origin of religion that goes deep into evolution, especially but not exclusively cultural evolution.

How did our early ancestors transcend the quotidian demands of everyday existence to embrace an alternative reality that called into question the very meaning of their daily struggle? Robert Bellah, one of the leading sociologists of our time, identifies a range of cultural capacities, such as communal dancing, storytelling, and theorizing, whose emergence made this religious development possible. Deploying the latest findings in biology, cognitive science, and evolutionary psychology, he traces the expansion of these cultural capacities from the Paleolithic to the Axial Age (roughly, the first millennium BCE), when individuals and groups in the Old World challenged the norms and beliefs of class societies ruled by kings and aristocracies. These religious prophets and renouncers never succeeded in founding their alternative utopias, but they left a heritage of criticism that would not be quenched.

Bellah’s treatment of the four great civilizations of the Axial Age—in ancient Israel, Greece, China, and India—shows all existing religions, both prophetic and mystic, to be rooted in the evolutionary story he tells. Religion in Human Evolution answers the call for a critical history of religion grounded in the full range of human constraints and possibilities.

Robert N. Bellah is Elliott Professor of Sociology Emeritus at the University of California, Berkeley.