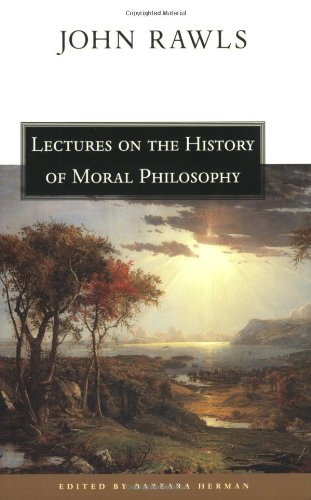 约翰·罗尔斯：《道德哲学史讲义》，哈佛大学出版社，2000年。
John Rawls, Lectures on the History of Moral Philosophy, 2000.

The premier political philosopher of his day, John Rawls, in three decades of teaching at Harvard, has had a profound influence on the way philosophical ethics is approached and understood today. This book brings together the lectures that inspired a generation of students–and a regeneration of moral philosophy. It invites readers to learn from the most noted exemplars of modern moral philosophy with the inspired guidance of one of contemporary philosophy’s most noteworthy practitioners and teachers.

Central to Rawls’s approach is the idea that respectful attention to the great texts of our tradition can lead to a fruitful exchange of ideas across the centuries. In this spirit, his book engages thinkers such as Leibniz, Hume, Kant, and Hegel as they struggle in brilliant and instructive ways to define the role of a moral conception in human life. The lectures delineate four basic types of moral reasoning: perfectionism, utilitarianism, intuitionism, and–the ultimate focus of Rawls’s course–Kantian constructivism. Comprising a superb course on the history of moral philosophy, they also afford unique insight into how John Rawls has transformed our view of this history.