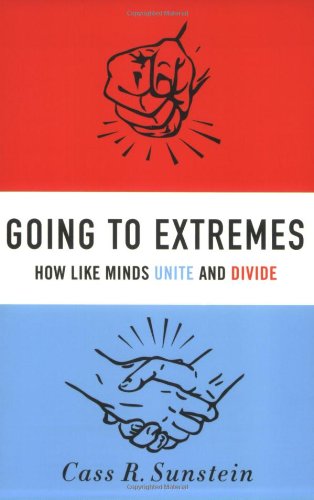 “Cass Sunstein has written Going to Extremes for those confounded by a country that remains stubbornly polarized. In clear, precise language, he explains that extremism is a consequence of the company we keep. He challenges not only what we think, but how we come to our beliefs, and he demonstrates that diversity of thought is the one ingredient necessary for both a healthy state and a working democracy.” –Bill Bishop, author of The Big Sort: Why the Clustering of Like-Minded American is Tearing Us Apart

“A path-breaking exploration of the perils and possibilities created by polarization among the like-minded.”–Kathleen Hall Jamieson, co-author of unSpun: Finding Facts in a World of Disinformation and Echo Chamber: Rush Limbaugh and the Conservative Media Establishment

“Sunstein’s book poses a powerful challenge to anyone concerned with the future of our democracy. He reveals the dark side to our cherished freedoms of thought, expression and participation. New strategies and new designs are required to make political discussion the constructive force our ideals prescribe. His book initiates an urgent dialogue which any thoughtful citizen should be interested in.” –James S. Fishkin, author of the forthcoming When the People Speak: Deliberative Democracy and Public Consultation

“Harvard law professor Sunstein (Radicals in Robes) explores the nature of group decision making, largely expounding on his contention that homogenous groups of like-minded people tend to adopt more extreme positions than groups with a diversity of opinions…. As President Obama’s nominee to head the Office of Information and Regulatory Affairs, Sunstein’s ideas…[have] attained a level of national importance.”–Publishers Weekly

Why do people become extremists? What makes people become so dismissive of opposing views? Why is political and cultural polarization so pervasive in America? Why do groups of teenagers, investors, and corporations take unnecessary risks? What leads groups to engage in such destructive acts as terrorism and ethic cleansing?

In Going to Extremes, renowned legal scholar and best-selling author Cass Sunstein offers startling insights into why and when people gravitate toward extremism. Sunstein marshals an abundance of evidence that shows that when like-minded people talk to one another, they tend to become more extreme in their views than they were before. This point applies to such diverse groups as religious organizations, corporate boards, investment clubs, and White House officials. Sunstein introduces original research to show that when liberals are brought together to debate affirmative action, they end up more supportive of it, while conservatives brought together to discuss same-sex unions become skeptical about same-sex unions. In courtrooms, radio stations, and chatrooms, enclaves of like-minded people are breeding ground for extreme movements.

Sunstein shows that a good way to create an extremist group, or a cult of any kind, is to separate members from the rest of society, either physically or psychologically. This disturbing finding casts new light on the dangers that arise whenever people self-select into niche groups of the like-minded. Sunstein’s findings help to explain such diverse phenomena as political outrage on the Internet, unanticipated “blockbusters” in the film and music industry, the success of the disability rights movement, ethnic conflict in Iraq and former Yugoslavia, and Islamic terrorism.

Providing a wealth of real-world examples–sometimes entertaining, sometimes alarming– Sunstein offers a fresh explanation of why partisanship has become so bitter and debate so rancorous in America and abroad–and of what concrete steps citizens and nations might take to halt the drift towards unjustified extremism.

Cass R. Sunstein is the Felix Frankfurter Professor of Law at Harvard University and the author of many books, including Nudge: Improving Decisions About Health, Wealth, and Happiness (with Richard Thaler), Infotopia: How Many Minds Produce Knowledge, Republic 2.0, Worst-Case Scenarios, Radicals in Robes, Why Societies Need Dissent, and Democracy and the Problem of Free Speech.