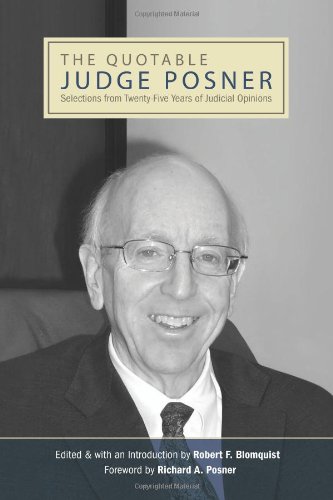 Collection of quotations and judicial opinions of federal appellate judge Richard A. Posner.

A collection of pithy and penetrating observations and rulings by one of the most famous appellate judges in America, The Quotable Judge Posner showcases the wit and wisdom of Richard A. Posner. During his more than twenty-five years as a federal appellate judge, Judge Posner reached over two thousand opinions, many of which are cited frequently in the opinions of Supreme Court Justices. This anthology presents the judge’s entertaining and insightful observations on fifty wide-ranging topics, including abortion, telecommunications, zoning, and planning. Law students who have encountered Judge Posner’s judicial opinions will benefit from this collection, as will general readers who will enjoy Posner’s trenchant comments on American society, constitutional norms, and legal culture.

“This is a breezy treatment, in dictionary style, of edited Posner quotes on a vast array of subjects. A fun book to peruse for the juridically obsessed.” — Robert J. Spitzer, author of Saving the Constitution from Lawyers: How Legal Training and Law Reviews Distort Constitutional Meaning