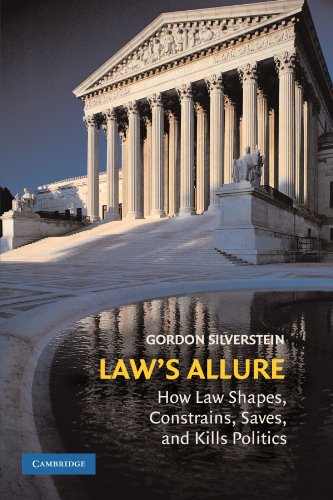 Winner of the C. Herman Pritchett Prize for the best book published in the field of law and courts in 2009 from the Law & Courts Section of the American Political Science Association.

“Law’s Allure is a masterful treatment of the causes and consequences of the juridification of American politics. Beautifully written and displaying Silverstein’s encyclopedic knowledge of American constitutional law and practice, the book helps us understand how the courts can both enable and disable our politics under different circumstances. Silverstein integrates both abstract principle and bare-knuckle politics into the account, resulting in a volume that is at the same time profound and accessible. A major contribution that will enlighten both scholars and the informed public.”
— Tom Ginsburg, The University of Chicago Law School

“Professor Silverstein provides an original and compelling analysis of the complex relationships between law and politics. His insights that juridification in the United States is on the rise, that juridification is more than government by judiciary, and that escaping from politics has numerous hidden costs are interesting, important and likely to provoke a good deal of conversation both within and without political science.”
— Mark Graber, University of Maryland

“Gordon Silverstein has given us a superb analysis of juridification, the messy interaction of supposedly objective legal rules with partisan interests that often produce public policy. Through both general reasoning and close studies of specific cases, he demonstrates how these forces noisily, and sometimes angrily, engage to create not a seamless web but a jig-saw puzzle whose jagged pieces never fit neatly together. Neither students of public law nor public policy can afford to miss this splendid book.”
— Walter F. Murphy, Princeton University

“Law’s Allure is a breathtakingly good book. Tracing through a substantial number of important case studies ranging from abortion and school desegregation through campaign finance and environmental litigation to the tobacco cases and more, Gordon Silverstein gives us a new paradigm for thinking about the role of courts in American politics, one that is more complete, convincing, and persuasive than we have ever had before in a single volume.”
— Kim Lane Scheppele, Princeton University

“A valuable contribution to the next generation of studies on constitutional politics. With well-chosen case studies and a useful analytical framework, Gordon Silverstein helps identify the whys, hows, and so-whats of interactions between politicians and judges in shaping public policy.”
— Mark Tushnet, Harvard Law School

“Law’s Allure: How Law Shapes, Constrains, Saves and Kills Politics provides an original and compelling analysis of the complex relationships between law and politics. Professor Silverstein’s insights that juridification in the United States is on the rise, that juridification is more than government by judiciary, and that this escape from politics has numerous hidden costs are interesting and important. The case studies are well written and informative, the research is solid, and the conclusions likely to provoke a good deal of conversation both within and without political science…Professor Silverstein provides a far more nuanced account of the relationship between law and politics than found in the existing political science literature.”
— Mark Graber, Balkinization blog

Judicial and political power are inextricably linked in America, but by the time John Roberts and Samuel Alito joined the Supreme Court, that link seemed more important, more significant, and more pervasive than ever before. From war powers to abortion, from tobacco to integration, from the environment to campaign finance, Americans increasingly turn away from the political tools of negotiation, bargaining, and persuasion to embrace what they have come to believe is a more effective, more efficient, and even more just world of formal rules, automated procedures, litigation, and judicial decision-making. Using more than ten controversial policy case studies, Law’s Allure: How Law Shapes, Constrains, Saves, and Kills Politics draws a roadmap to help politicians, litigators, judges, policy advocates, and those who study them understand the motives and incentives that encourage efforts to legalize, formalize, and judicialize the political process and American public policy, as well as the risks and rewards these choices can generate.

In Law’s Allure, Gordon Silverstein explains the risks and rewards of America’s increasing reliance on litigation, judicial decisions, and formal legal rules to achieve political and policy goals, drawing a map that helps explain how, when, and why law and judicial rulings shape, constrain, save, and sometimes even kill politics.

Gordon Silverstein is Assistant Professor of Political Science at the University of California, Berkeley. A former journalist with a PhD from Harvard University, Professor Silverstein also has taught at Rice University, Dartmouth College, Lewis & Clark College, and the University of Minnesota. Silverstein has written a number of articles and book chapters on American politics, the separation of powers, and judicial power in comparative perspective and is the author of Imbalance of Powers: Constitutional Interpretation and the Making of American Foreign Policy (1996).