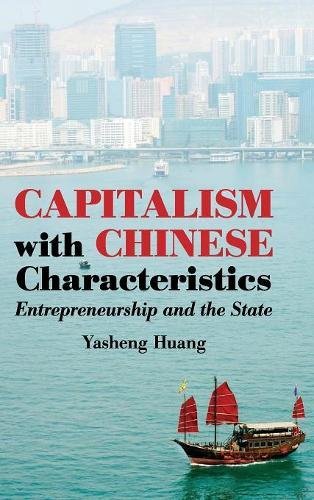 “The development of the Chinese private sector is a key to the future shape and performance of the Chinese economy. At present, the subject is widely misunderstood. This book does more than any other to clarify the issues and point the way forward.” – Christopher Howe, FBA, School of East Asian Studies, University of Sheffield

“Yasheng Huang is an insightful scholar of China’s political economy. In this important book, he shows how China’s rural economy took off in the 1980s, led by ‘township and village enterprises’ that were essentially private, only to be ignored in the 1990s by state-led development that focused on urban regions such as Shanghai. The ‘Shanghai miracle,’ he argues – and as any businessman who has worked there knows – was not the simple triumph of capitalism, but of a stronger and more intrusive (and effective) state. If one wants to understand the policy origins of China’s growing divide between rich and poor, urban and rural, one need look no further than this book.” – William Kirby, Harvard University

“Sure to generate a lively debate, Professor Huang’s study provides a provocative and well-researched challenge to much current thinking on China’s economic development. The widely shared gains of the 1980s have not been matched in more recent years. Danger signs include the stagnation in household incomes, growing inequality and illiteracy, and heightened governance problems. Huang argues that China will not be able to continue to grow unless the benefits of growth are widely shared through fundamental political and legal reforms.” – Susan Rose-Ackerman, Yale Law School

“Most books about China’s economy and their authors fall into one of two camps: those that are hypercritical and those that are hyperlaudatory. Professor Huang’s book is closer to the former than the latter, for example, he characterizes China’s economy as ‘…crony capitalism built on systemic corruption and raw political power.’ Yet, his book is different from, as well as better than, others in that genre because it gives ample recognition to contrary views and empirical data supporting them. Consequently, Capitalism with Chinese Characteristics is both immensely informative and enormously provocative.” – Charles Wolf, Jr., Pardee RAND Graduate School

“For years, Western economists are amazed that China’s growth is obviously fueled by factor accumulation and yet her capital markets appear to be under developed. Yasheng Huang’s book provides some refreshing information and analysis. He shows that in China’s vast rural areas, which Western academics often cannot obtain good and detailed information, economic and financial liberalization went much further than credited by outside analysts and that the rigorous development of private entrepreneurship explained much of China’s takeoff. His thesis is worthy of attention; this book will enhance our understanding of China’s economy and lead us to take a more thorough look at the development process.” – Bernard Yeung, University of Singapore Business School

Yasheng Huang teaches international management at Sloan School of Management, Massachusetts Institute of Technology. His previous appointments include serving as assistant professor at the University of Michigan, associate professor at Harvard Business School, and consultant to the World Bank. In addition to journal articles, Professor Huang has published Inflation and Investment Controls in China (Cambridge University Press, 1996), FDI in China (1998), and Selling China (Cambridge University Press, 2003). Selling China examined the institutional drivers of foreign direct investment (FDI) in China and was profiled in numerous publications, including the Wall Street Journal, Economist, Businessworld, Le Monde, Economic Times, and Liangwang (Outlook in China). His research on FDI was cited in a number of major government reports on FDI policies and regulations. In collaborative projects with other scholars, Professor Huang is conducting research on engineering education and human capital formation in China and India and on entrepreneurship. Professor Huang is the recipient of the Social Science-MacArthur Foundation Fellowship and the National Fellowship.

MOST people, particularly those living outside China, assume that the country’s phenomenal growth and increasing global heft are based on a steady, if not always smooth, transition to capitalism. Thirty years of reforms have freed the economy and it can be only a matter of time until the politics follows.

This gradualist view is wrong, according to an important new book by Yasheng Huang, a professor at Massachusetts Institute of Technology. Original research on China is rare, largely because statistics, though plentiful, are notoriously unreliable. Mr Huang has gone far beyond the superficial data on gross domestic product (GDP) and foreign direct investment that satisfy most researchers. Instead, he has unearthed thousands of long-forgotten pages of memoranda and policy documents issued by bank chairmen, businessmen and state officials. In the process he has discovered two Chinas: one, from not so long ago, vibrant, entrepreneurial and rural; the other, today’s China, urban and controlled by the state.

In the 1980s rural China was in the ascendancy. Peasants, far from being tied to the land, as has been assumed, were free to set up manufacturing, distribution and service businesses and these were allowed to retain profits, pay dividends, issue share capital and even a form of stock option. State banks rushed to provide the finance. Nian Guangjiu, a farmer from impoverished Anhui province, built up a business selling sunflower seeds (a popular snack), employed over 100 people and made a million yuan (nearly $300,000) in profit in 1986—just a decade after Mao’s death. Because most of this activity was set up under the misleading label of “Township and Village Enterprises”, Western academics largely failed to spot that these ostensibly collective businesses were, in fact, private.

But then, in 1989, came the Tiananmen Square protests. A generation of policymakers who had grown up in the countryside, led by Zhao Ziyang, were swept away by city boys, notably the president, Jiang Zemin, and Zhu Rongji, his premier. Both men hailed from Shanghai and it was the “Shanghai model” that dominated the 1990s: rapid urban development that favoured massive state-owned enterprises and big foreign multinational companies. The countryside suffered. Indigenous entrepreneurs were starved of funds and strangled with red tape. Like many small, private businessmen, Mr Nian was arrested and his firm shut down.

True, China’s cities sprouted gleaming skyscrapers, foreign investment exploded and GDP continued to grow. But it was at a huge cost. As the state reversed course, taxing the countryside to finance urban development, growth in average household income and poverty eradication slowed while income differences and social tensions widened. Rural schools and hospitals were closed, with the result that between 2000 and 2005 the number of illiterate adults increased by 30m. According to Mr Huang, the worst weaknesses of China’s state-led capitalism—a reliance on creaking state companies rather than more efficient private ones, a weak financial sector, pollution and rampant corruption—are increasingly distorting the economy.

But what about the growing cohort of Chinese companies starting to strut the world stage? Surely that is evidence of a healthy and expanding private economy. Mr Huang’s evidence shows that, on closer inspection, these firms are either not really Chinese or not really private. Lenovo, a computer group, has succeeded because it was controlled, financed and run not from mainland China but from Hong Kong (a happy legacy of the founder’s family connections there—not something enjoyed by most Chinese businessmen). The subsidiaries of Haier, a white-goods maker, were also put out of reach of mainland bureaucrats early on. Wahaha, a food producer, Galanz, a maker of microwave ovens, and many others all depended on foreign protection and capital to grow and escape state strictures.

Indeed one of the main, and underappreciated, functions of foreign investment in China has been to play venture capitalist to domestic entrepreneurs. As for Huawei, a telecoms group and one of China’s much vaunted “global” companies, its structure and links to the state are so convoluted that the most diligent China-watchers have little idea if it is a private or state firm. They do, however, agree that Huawei’s opacity is a microcosm of China’s distorted economy.

Could China genuinely embrace entrepreneurial capitalism again, as it did in the 1980s? Its current leaders under President Hu Jintao, who cut his teeth in Guizhou and Tibet, two of the poorest and most rural provinces, talk about supporting the countryside and reducing social inequality. But nothing much has been done. China’s deep problems demand institutional and political reform. Sadly, as Beijing’s heavy-handed control of the Olympics suggests, there is scant hope of that.